When it comes to the most popular sweetener in China, I believe many people will blurt out the name "erythritol". So do you know what is currently the most popular sweetener in the US market? The answer is allulose. This seemingly niche sweetener is becoming one of the first-choice sweeteners for NPD in the United States at a leap-forward speed. Only in the first half of this year, a large number of new products have chosen allulose as a sweetener. The industry also predicts that allulose will become the next popular natural sweetener to sweep the world after stevia and erythritol.

Allulose (Allulose) is an epimer of fructose, a monosaccharide that exists in nature but has very little content, and is also called a rare sugar. Allulose was first found in wheat more than seventy years ago, and then it was also found in raisins, dried figs and brown sugar. In 2015, allulose was approved by the FDA and can be used in baked goods, candies, sweet sauces, dairy products, ice cream, desserts, beverages and other products. But after that, psicose has not made much improvement in the US market. This is because psicose is a monosaccharide, which is still regarded as a sugar traditionally, so it belongs to "added sugar" and needs to be included. Carbohydrates and total sugars, so it cannot be used as a "low-calorie sweetener" like other sweeteners.

In 2019, allulose ushered in spring. The FDA announced that the low-calorie sweetener psicose was excluded from the labels of "added sugars" and "total sugars". From now on, it is no longer necessary to calculate the amount of addition in these two categories. The calorie of sugar is set at 0.4kcal/g. This policy rectifies the identity of psicose as a "natural low-calorie sweetener". Many ingredient companies have begun to increase the production of psicose. At the same time, new food and beverage products on the US market have begun to use psicone on a large scale. sugar. In North America, the number of new products containing allulose in 2020 has tripled compared to 2019. 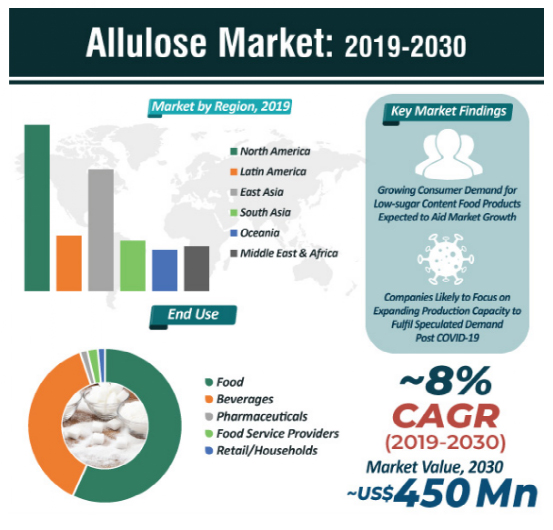 Futuremarketinsights predicts that by the end of 2020, the global psicose market will reach US$210 million, of which 55% is used for food, 37% is used for beverages, and a small part is used for medicine; powdered psicose products account for about the market 87% of it. It is estimated that in 2030, the global market for allulose will reach 450 million U.S. dollars, and it is expected to grow at a compound annual growth rate of 9.1%. North America will account for more than half of the market.