From zero sugar to zero preservatives

"Half a can of orange soda is a preservative". In the past, people avoided preservatives, however people accepted it. Because there are few beverages which do not add preservatives.

This news gave the public a signal that it is not impossible to do zero preservatives, but most companies are unwilling to do it. After all, for beverage companies, producing 0 preservatives drinks is not cost-effective. 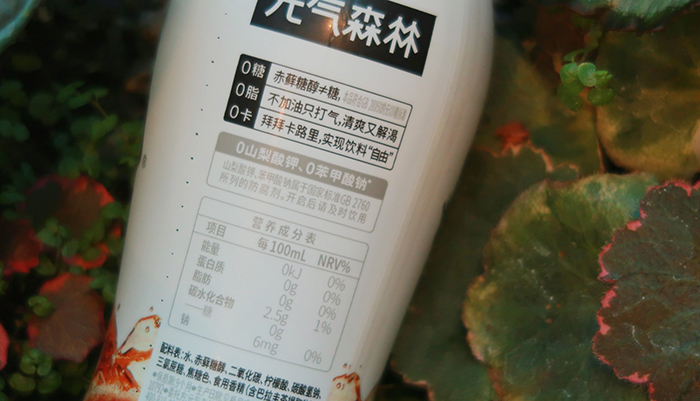 1. The business world is always more concerned with interests?

Preservatives are tools that food and beverages use to race against time. Since ancient times, in order to extend the shelf life of food and beverages, they have begun to explore ways of "preservation", such as high-salt pickling, high-molasses, and wine.

In China's "Standards for the Use of Food Additives", about 30 kinds of preservatives are listed that can be used in compliance with regulations. Among them, sodium benzoate, potassium sorbate and phosphoric acid are also listed. These three are the more common preservatives in the beverage field.

On the one hand, the food and beverage industry suffers from "preservative dependence", which has prompted the market size of preservatives to increase year by year. The data shows that from 2015 to 2019, the average annual compound growth rate of China's sodium benzoate market is 5.5%, and the growth rate will drop to about 3.8% in 2020-2025.

On the other hand, due to improper use of preservatives, beverage companies are often "overturned". In October last year, the Heilongjiang Demoligogas fermented beverage was found to have excessive use of sorbic acid preservatives in order to extend the shelf life, and the state imposed a violation penalty for this.

In fact, although it can be used within the scope of national regulations, there has been controversy over its safety internationally. The European Community Child Protection Group believes that sodium benzoate "is not suitable for use in children's food", and Japan also strictly restricts it.

The reason is, first of all, the strong market share of the two international giants makes them confident. According to data, in 2019, Coca-Cola's market share in the domestic carbonated beverage market was as high as 59.5%, and PepsiCo's 32.7%. That is to say, before 2020, two Cokes will occupy more than 90% of the domestic carbonated beverage market.

Under the erosion of the two major foreign brands, the beverages that domestic consumers can choose are basically from these two brands.Secondly, the use of chemically synthesized preservatives has low cost and good effect, which is in line with the principle of commercial interests first. And if you want to achieve 0 preservatives, you need to pay a high price and time cost.

Taking Genki Forest as an example, in order to achieve zero preservatives, Genki Forest has successively built factories in 5 places including Chuzhou, Anhui, Zhaoqing, Guangdong, Xiqing, Tianjin, Xianning, Hubei, and Dujiangyan, Sichuan. At the same time, the fully automatic aseptic production technology is introduced to realize the whole process of aseptic material, packaging and environment. These lines allow products to achieve the highest level of microbial control in the industry - log6 levels. In other words, the probability of being affected by microorganisms in every million bottles of beverages is no higher than one bottle.

As for the Coca-Cola and Pepsi brands, it is quite expensive to re-open new factory production lines. The giants all understand the truth that the tail can't be too big.The data shows that Genki Forest has set up 5 factories to promote 0 preservatives, and the total investment is as high as 5.5 billion yuan. Subsequent as the scale increases, the cost of investment will be greater. 5.5 billion may not be much for a giant brand, but for a newcomer in an industry like Genki Forest, 5.5 billion exceeds its revenue by more than 50%.They are committed to upgrading the industry and pursuing the ultimate product. They who make the product to the extreme will naturally gain benefits.Consumers already know what they need and why they are paying.

2. 0 preservatives are an advantage and a trend

Because compared with the past, today's young consumers know too much what they want, but suffer from the market's inability to make good products to meet their needs.

For example, in terms of sugar control, long before zero-sugar beverages became popular across the country, many consumers hoped to drink beverages with less sugar content; and long before "staying up water" was launched, consumers began to "brew wolfberry in alcohol". Punk Health Bureau; for example, before proposing 0 preservative beverages, consumers want to drink beverages with no or less preservatives added.In the hot summer, with the increasing frequency of beverage consumption, consumers are paying more and more attention to health preservation and pursuing natural green beverages.In fact, more and more people who pay attention to the ingredient list have emerged in the market very early and have expectations for high-quality products.

This is also the reason why domestic beverage brands in the market are willing to invest high costs to upgrade their factory lines and produce beverage products with zero preservatives. It is based on the judgment of these domestic brands on the future market, and also based on the insight of consumer demand.From 0 sugar to 0 preservatives, in the eyes of the "beverage giant" giant, spending a lot of money to deploy aseptic production lines may be against the principle of commercial interests. But just "expensive" and "difficult" consumers don't need it? On the contrary, for consumers, through the upgrading and innovation of the industry, the popularization of 0 preservatives is beneficial and harmless. For the beverage industry, it may be another key competition point after 0 sugar.

Zong Qinghou, founder of Wahaha, once said: The beverage industry is not out of date and will always be a sunrise industry. However, the beverage industry has always been "introverted".Looking back on the development process over the years, domestic beverage brands have been struggling to survive in the few remaining market shares outside the "two music".According to reports, in the 1990s, China's seven major soda factories signed joint venture agreements with Coca-Cola and PepsiCo, adhering to the attitude of learning advanced management and technology from industry leaders, but eventually "lost their own things". The "two music floods the seven armies" in the history of beverages.I thought the market would always be like this, and everyone accepted the status quo, but Genki Forest forcibly tore a hole in the rock-solid soft drink market, which also gave many domestic brands the hope of rising.Today, the "Ingredients List Revolution" has been launched again. After consumers have gradually developed the habit of paying attention to product ingredient lists and nutritional ingredients, it may lead to a wave of zero preservatives.As industry insiders say: the war on consumer goods is about products and supply chains, and it is about long-termism. With a more stable supply chain, technology accumulation, R&D capabilities and production processes, companies seem to have greater confidence.

In the process of reshaping China's beverage market, we can be delighted to see that supply and demand resonate well, new supply forms new barriers, and the powerful consumption power and the consumer opinions of the people are also constantly impacting the supply and boosting the industry spiral. The rapid rise has injected vitality into the high-quality development of the entire industry.